Three years ago today, in a conference call, the NRC announced that it would approve the 20 year license extension for Vermont Yankee. One week later, on March 11, the reactors at Fukushima began melting down. Much has changed in our evacuation zone in three short years. Those living in Fukushima’s evacuation zone lost everything in one day. What are their lives like now?

On Tuesday, March 11, we will learn more. Safe & Green is hosting a “Voices of Fukushima” gathering from 6:30-8:30pm at the Brattleboro Food Coop Community Room. The direct entrance is on the side of the Coop on Canal Street. We will show four short documentaries about Fukushima, then Chikako Kaneko will join us for a discussion and describe her most recent trip back to Japan, where she visited with Chikako Nishiyama of Kawauchi, Greenfield’s sister city.

The four films include a update on the cleanup in Namie, the town Brattleboro adopted in 2013; a explanation of the current status of the reactors from Arnie Gundersen; a perspective from a farmer and a displaced family, with information on radiation testing of children; and a walk through temporary shelters which evacuees fear are now their permanent homes. All together, the films are about 35 minutes. 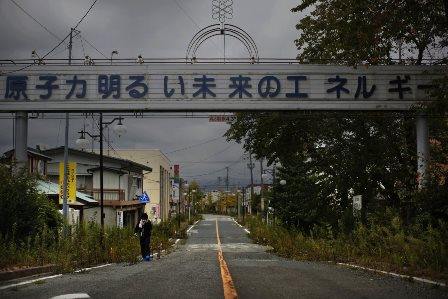 The entrance to Namie, Japan reads “Nuclear Power — The Energy for a Better Future.”
As I write this, I am empowered by the five hundred young people who have handcuffed themselves to the White House fence to protest the KXL pipeline, and the thousands across Pennsylvania Avenue supporting them.

“For me XL Dissent is about young people standing together and engaging in a bold act of civil disobedience, and through this, demonstrating our commitment to making this world a more humane, peaceful, and inclusive place to live,” said Matthew, a 20 year old sophomore from Columbia University.