This is completely untrue, as a moment’s consideration will demonstrate that fossil fuels, especially oil in the form of gasoline and diesel, are essential to every stage of the nuclear cycle, and CO2 is given off whenever these are used. 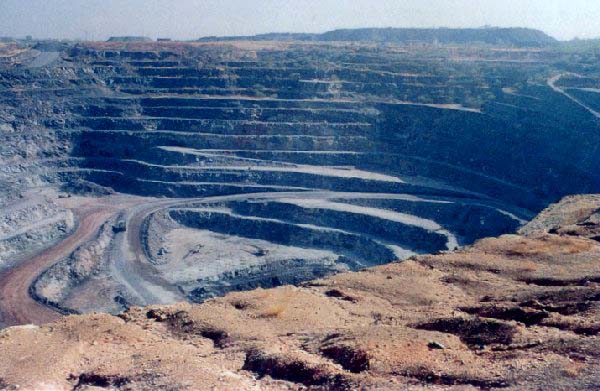 This is Ranger Uranium Mine’s Pit Number 1. All of the material removed from this hole, over-burden and ore, was moved by truck. 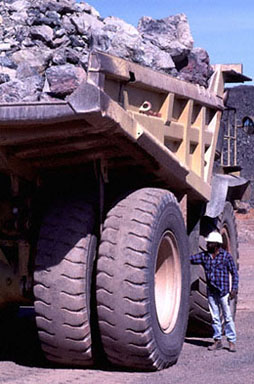 Plus – The tires on these trucks are also particularly energy-intensive to make, and there is a world-wide short of these tires.

These trucks run on diesel. It would be interesting to know how much diesel is used for how much ore in a year at Ranger.

The ore is taken to a mill, usually nearby to keep trucking costs down. The mill crushes the rock to powder. The powder is then treated with
sulphuric acid to dissolve the uranium, leaving the rock (depleted ore) behind. 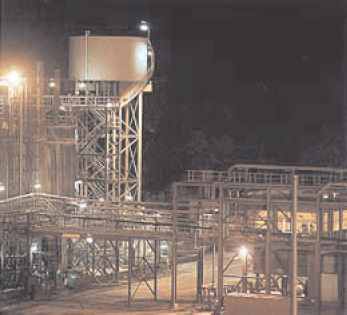 The depleted ore is washed and neutralized using lime, and the slurry is pumped to the tailing ponds. 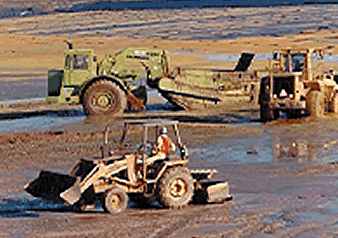 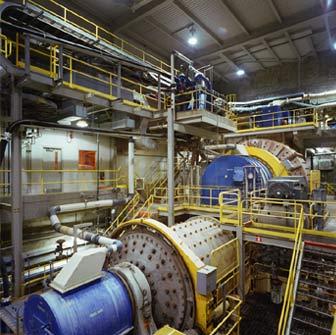 Hard rock ores, such as quartz conglomerates and granites, are approximately 3 to 4 times more energy-intensive than soft rock ores (limestones and shales) to crush. 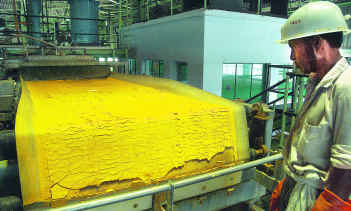 All of these chemicals; sulfuric acid, lime, amines, kerosene and ammonia are energy-intensive to make, and the energy required is in the form of fossil fuels, that produce CO2 when used.

The dissolved uranium solution, including other metals, is then treated with amines dissolved in kerosene to selectively separate the uranium, which is then precipitated out of solution using ammonia, forming Ammonium di-uranate, or “yellowcake”. 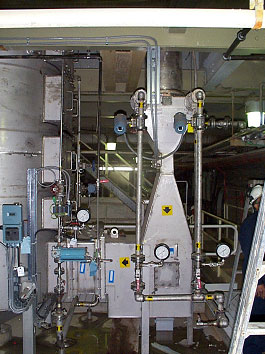 In the final stage, the yellowcake is roasted at 800°C in an oil-fired furnace
called a calciner. The Ammonium di-uranate is converted to 98% pure
Uranium oxide (U3O8), which is a dark green powder that is packed into 44-gallon drums for shipment.

Drums of Uranium oxide are stacked by forklifts, while they await shipment, sometimes to the other side of the world.

The next stage involves dissolving the Uranium oxide in Hydrofluoric
Acid and excess Fluorine gas to form Uranium hexafluoride gas :

Hydrofluoric Acid is one of the most corrosive and poisonous compounds known to man. 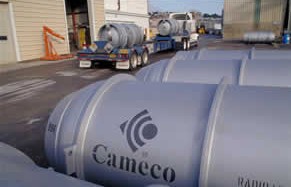 The Uranium hexafluoride gas is then transported in cylinders to be enriched. 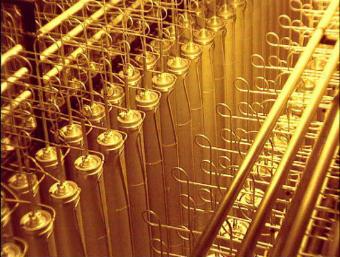 The centrifuges are powered by electricity, so this stage could be powered by nuclear power, BUT are universally powered by COAL PLANTS – Emitting CO2 mercury and other toxic pollutants.  Building the centrifuge cascades also requires lots of fossil fuels.

Low-enriched (3.6%) Uranium hexafluoride gas is then transported to the fuel fabrication plant.Again more fuel, and CO2 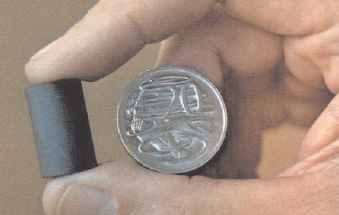 The UF6 gas is converted to Uranium dioxide (UO2) powder, pressed into pellets, and baked in an oil-fired furnace

to form a ceramic material. These are then loaded into a tube made of a zirconium alloy. Several of these tubes form one fuel assembly. 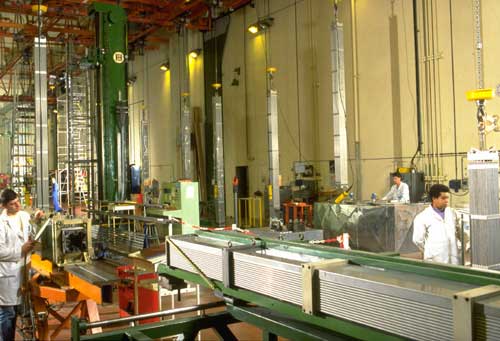 For every ton of Uranium in the fuel, up to 2 tons of Zirconium alloy are needed.

Zirconium is a metallic element derived from zircon, an ore of Zirconium silicate (ZrSiO4), which is a by-product of rutile sand mining (another energy-intensive business). Naturally occurring Zirconium is always found with Hafnium, which has to be removed (with difficulty) for nuclear uses.

Fresh fuel is only mildly radioactive and can be handled without shielding. The fuel assemblies are then transported to the reactor by truck or train. A 1000 MW(e) nuclear reactor contains about 100 – 130 tons of

Uranium dioxide, and usually one third of that is replaced in rotation each year. 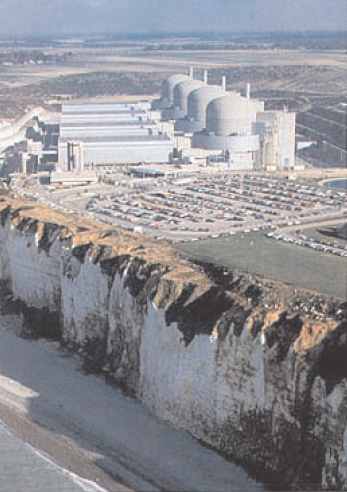 If you ignore the vehicles that the workers use to get to work, the reactor does not produce any CO2.

But it does use electricity, as well as produce it, and to the extent that electricity is largely produced by fossil fuels, this needs to be counted in the energy balance. IN FACT, to start a nuke plant up requires outside electricity. 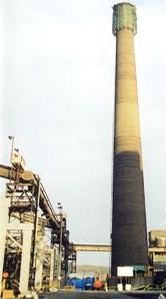 It takes a lot of steel to built a nuclear power station, and steel is made by smelting iron ore with coking coal. 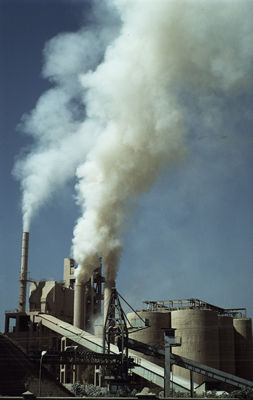 And a nuclear power station (and storage) uses lots of concrete, which is made from cement. Cement is made by crushing limestone and roasting it, using fossil fuels, to drive off Carbon dioxide.

So cement is particularly CO2-intensive. 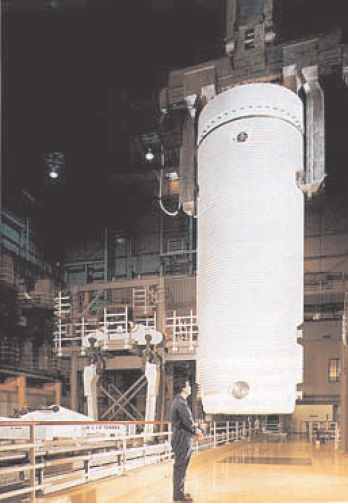 In the US and many other places, these spent fuel rods stay at the reactor a lot longer than that, while politicians argue over what to do with it next. 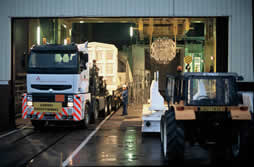 Reactor parts and waste are moved by road and rail. 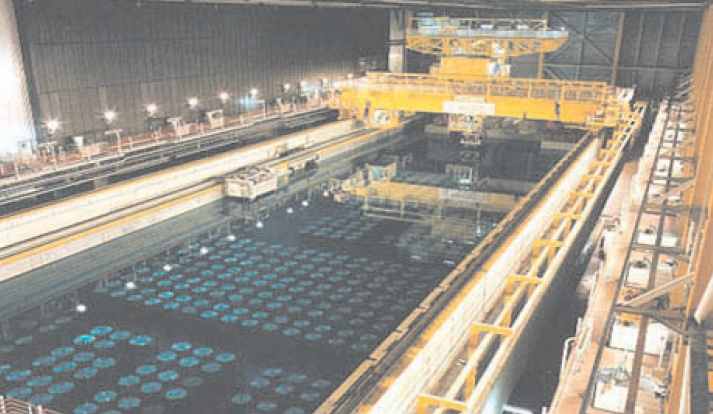 Spent fuel is kept under water until it is reprocessed. This keeps it cool and acts as a radiation shield. In the ‘once through’ process, the fuel rods are dissolved in acid, and the Plutonium is extracted, and the remainder including the Uranium becomes high-level waste. In the ‘recycling’ process, Uranium is also recovered. 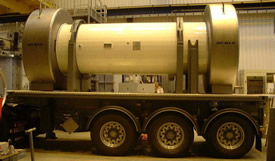 Recovered Plutonium and Mixtures of Plutonium and Uranium oxides (MOX) are sent by road back to the fuel fabrication facility to be used in new fuel rods. 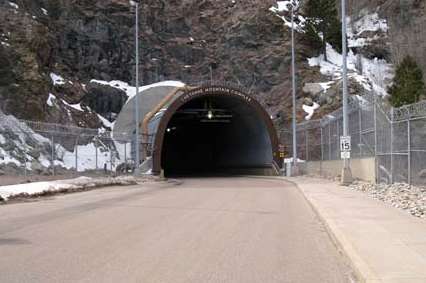 This is not really a waste repository, ( it is the NORAD military bunker at Cheyenne Mountain ) but this is what one might look like if one was ever to be built. 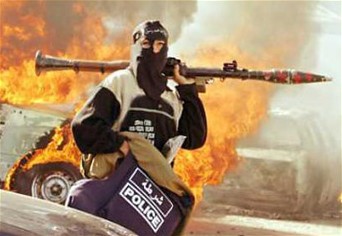 This is a security policeman, well , it does say POLICE on his bag. I do hope everything is alright.

Ah, that’s more like it. How many miles per gallon do you get out of one of those? 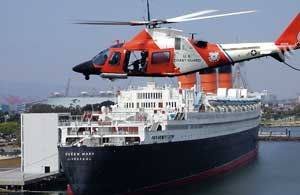 Security surveillance is needed to prevent terrorists from getting access to radio-active materials. When was the last time you saw cameras pointed at a solar water heater?

And increasingly these days, one also has to defend ones nuclear facilities against attack by an increasingly sophisticated enemy.

This is the Tor-M1 – a fully integrated combat vehicle with anti-missile/anti-aircraft missiles, that the Iranians are getting from Russia to protect themselves from the peace-makers.

As you can see, every step of the nuclear power cycle and waste involves the expenditure of energy derived from fossil fuels, which nuclear electricity cannot replace. Thus it is completely untrue to say that nuclear energy is greenhouse friendly.

In the paper “Nuclear Power : the energy balance” by J.W. Storm and P. Smith (2005) download here, the authors calculate that with high quality ores, the CO2 produced by
the full nuclear life cycle is about one half to one third of an
equivalent sized gas-fired power station.

For low quality ores (less than 0.02% of U3O8 per tonne of ore), the CO2 produced by the full nuclear life cycle is EQUAL TO that produced by the equivalent gas-fired power station.

So the BIG question is:

Given that the greenhouse claims for nuclear power are false, and if the only way the nuclear industry can operate is with massive amounts of cheap fossil fuels, especially diesel derived from oil, and with oil going to be very much scarcer in
the future, is this a good time to be thinking of increasing the nuclear industry ?

For a recent collections of articles on the subject, see Nuclear power, Peak Oil and Climate Change (Energy Bulletin).